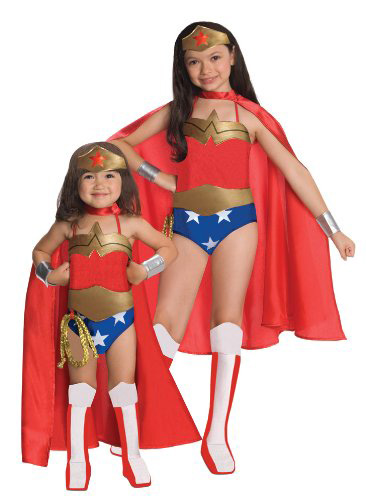 A Wonder Woman Costume for Kids is an all time favorite costume for little girls and big girls alike. If your daughter or granddaughter needs a costume for the Halloween party, Wonder Woman is the perfect choice. Whether she is going around door to door for “trick-or-treat” or is in the party itself, the costume of Wonder Woman would make her noticeable and likeable, because who doesn’t love Wonder Woman?

The costume itself is known by everyone, and since it’s for kids, you can do some customization to the classic adult suit if you want. What you will find on this page are some awesome Wonder Woman costumes for kids that will give you loads of choices to pick from.

Wonder Woman has been an idol to many people, especially kids – and so she’s a great choice for a Halloween costume. She is the symbol of power, justice and equality to them and when they do something right, like protesting something wrong, they are most probably thinking of Wonder Woman and they feel like superheroes themselves. 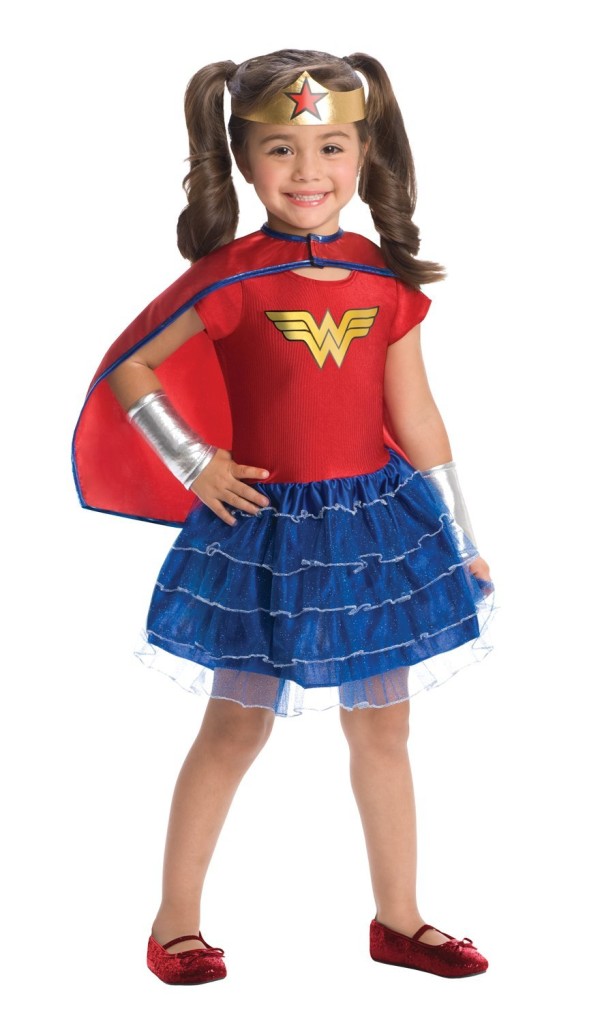 By now, we more or less know the story of Wonder Woman. She was a woman named Diana, living with a group of other superlatively smart, beautiful, fast, and strong women known as Amazons in Paradise Island. When a plane crashed on their island and the pilot survived, they got into a competition about who gets to return the survivor to the world and save the world from dishonesty, war, and bigotry. 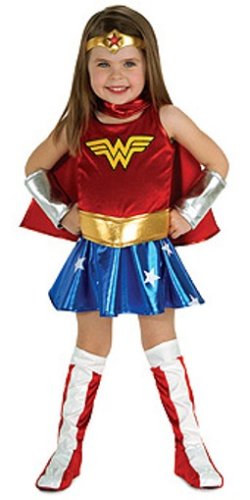 The basic of the costume is simple: a red shiny top (might be leather or other material) with a blue, star-sprinkled brief pants. The good thing about the costume is that no matter what the age, it is available and suitable for all ages.
So let us go to the finer details of the magnificent costume. Normally, the top is a red corset. Sometimes there is a big, shiny golden “W” attached on the front. The cloth is usually synthetic, but if your child has skin problems, cotton wouldn’t look bad; or you could have cotton or woolen lining on the inside of the suit. You can abandon the corset style and have a traditional top with or without sleeves. 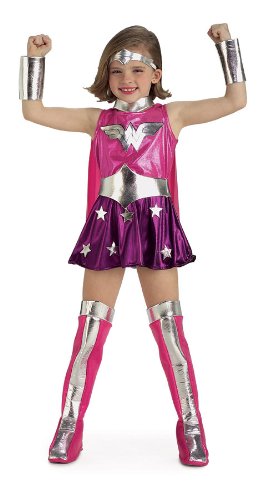 Must Have Accessories For Wonder Woman Costumes For Kids

Leotards are what the real Wonder Woman wore, and you might want to follow that. However, some might think that a little girl should wear something more comfortable and “age-appropriate”. Fitting shorts are an option, as is a miniskirt. Just make sure whatever it is, it is blue in color. There are white stars on the leotard of Wonder Woman, so make sure to stick a few cute felt stars on whatever it is that replaces (or doesn’t) the leotard.

Once you got these two, there is the famous golden waist belt of Wonder Woman, which is the source of all her powers. Without it, Wonder Woman would never be complete. You can purchase it or just make it yourself at home.

The boots of Wonder Woman are quite unforgettable to anyone who has ever seen it. Usually it is an ankle length blue and white boot, but a red and white or red and blue combination would not look bad either. You can also improvise with the length of the boot, though if you want to make it higher than the ankle, remember that young girls will have trouble sitting.

The indestructible bracelets that have helped Wonder Woman in countless occasions are not to be forgotten. Silver in color, they’re readily available for purchase on the internet. Remember that they are bulletproof and should at least look like it.

Speaking of signature weapons, the “Lasso of Truth” is a must.

With all the weapons and the perfect costume, you can bet that your little girl will have a good time at the party or out trick or treating.

Are you still looking for more Fortnite Halloween Costumes? On this page you'll find plenty of … END_OF_DOCUMENT_TOKEN_TO_BE_REPLACED

Are you looking for Deadpool Costumes For Women? On this page you'll find plenty of gorgeous … END_OF_DOCUMENT_TOKEN_TO_BE_REPLACED

Are you looking for Captain America Costumes For Women? On this page you'll find plenty of … END_OF_DOCUMENT_TOKEN_TO_BE_REPLACED

Are you looking for Fortnite Cosplay Costumes and accessories for adults and kids? Below you'll … END_OF_DOCUMENT_TOKEN_TO_BE_REPLACED

Are you looking for Mermaid Halloween Costumes For Women? On this page you'll find plenty of … END_OF_DOCUMENT_TOKEN_TO_BE_REPLACED

Are you looking for Sally Nightmare Before Christmas Costumes? You'll find plenty of costumes for … END_OF_DOCUMENT_TOKEN_TO_BE_REPLACED

Are you looking for a Jack Skellington Costume For Men? You'll find plenty of Jack … END_OF_DOCUMENT_TOKEN_TO_BE_REPLACED

Are you looking for a Female Jack Skellington Costume?   Which Female Jack … END_OF_DOCUMENT_TOKEN_TO_BE_REPLACED

Are you looking for a cool Inflatable Pirate Ship? On this page you'll find plenty of inflatable … END_OF_DOCUMENT_TOKEN_TO_BE_REPLACED